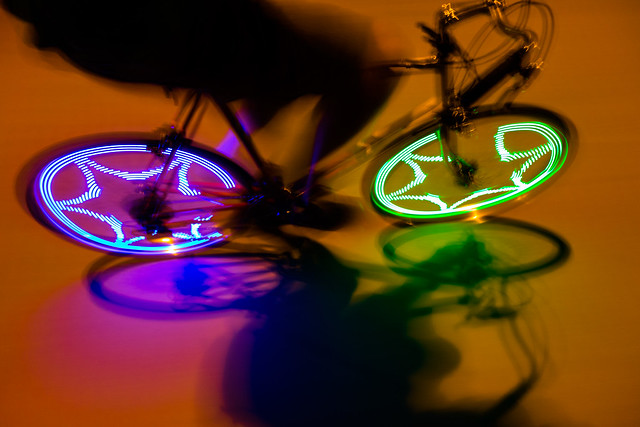 We have been fans of New Zealand's Antoine Pethers since we first saw his collection of bicycle photography. We asked him questions to learn a little more about him and for tips on how he takes such great photos and he was gracious enough to be our guinea pig in the first edition of our Monkeylectric customer profiles.

Antoine pictured with the "impossibly pink" Lightpath in Auckland, NZ

Please tell us a little about yourself, where do you live and what do you do?

My name is Antoine Pethers. I live in Auckland, New Zealand, and work in commercial printing.

What is your bicycling and artistic background?

I loved riding bikes as a child and back then it was a perfectly normal thing to do, we even rode to school. That's rare now as parents perceive cycling on the road as a dangerous activity.

In my mid 20s I worked in a design studio and we had this one young guy that was so obsessed with cycling it kind of rubbed-off on the entire staff. Before long I was totally hooked and purchased a mountain bike to race with my work colleagues. As well as commuting by bike we'd meet-up on Sundays to train on empty country roads, usually with the boss and a client in-tow.

Ten years ago I dusted-off my mountain bike and began riding to work again. I loved it so much I couldn't stop, and I wondered why more people didn't use bikes to get around, it was so much fun.

What is my artistic background? Well I've been interested in art, design and photography from an early age and have worked in those areas most of my career.

What is it like riding a bike where you live?

Auckland is in the midst of a bike-culture boom at the moment. After decades of neglect a lot of money is being spent on bicycle-infrastructure in the city and it's slowly filtering out to the suburbs. We have some world-class facilities now like the impossibly pink Lightpath, and everyones' fingers are crossed a cycle-path called Skypath will be slung underneath the Auckland Harbour Bridge so those living in the north of the city (like me) can actually ride into downtown. At the moment you have to catch the ferry or ride 50km around the top of the harbour! In my part of town cars still rule and it's pretty gladiatorial, but attitudes are slowly improving.

How did you get the idea to photograph your Monkeylights?

I'm totally fixated with taking pictures of bikes and once I had that first Monkeylight installed, the patterns were so captivating I simply HAD to get pictures of them.

What is your process?

I work shiftwork so most weeks I'm riding in the dark, be it very early in the morning or late at night. I pull to the side of the bike lane, manually set the focus and exposure controls on my compact camera, and ride along holding it out at arms-length. I use a wrist strap for security and hold the camera upside down so I can press the shutter and my arm isn't in the frame. People assume I use some kind of selfie-stick, but at 6' 5" I just have really long arms!

Do you have any tips for someone else who may want to photograph Monkeylights in motion?

Find a nice wide empty street or you'll ride into something and hurt yourself. Pedal at a steady pace and experiment with slower and slower shutter-speeds until you get the best results. It needs to be long enough that the Monkeylight does a whole 360º rotation and doesn't overlap too much. Getting a little technical here, but I use a low ISO setting (usually 100) to keep the noise down (the grainy stuff in night shots) and a small aperture like f11 so the long shutter speed doesn't over-expose the photos. Because the LEDs are pulsing they come out sharp even if everything else in the image is a bit soft and wonky. Some of my best shots were captured as I rode under street lights, you never quite know what you'll end up with.

I take them in bursts and pick-out the best ones when I get home. You will get lots of rejects, that's half the fun.

Does it require any special equipment?

You probably need a camera with manual exposure controls, but you might get a result using the "fireworks" mode (or similar) on a compact camera. It's best if you can set the focus manually as you'll get mixed results letting the camera hunt around in the dark looking for something to focus on. I specifically bought a small camera (Sony RX100), so it's not a chore to carry along on bike rides. A wide-angle lens is handy if you need to get both wheels in the shot.

Is there an objective or statement you hope to make with your photos?

I'd like to think they portray the sheer joy of riding, and the fact you don't have to stop after it gets dark. Mostly though, it's about capturing the beauty of these mobile light-shows, they still entrance me.

How did you hear about Monkeylectric?

I stumbled across one of your early videos online, the one with the catchy electronic soundtrack. I couldn't afford that first model but when the M232 came out and someone began importing them to New Zealand I took the plunge. Because I'm always riding in the dark I thought it would increase my visibility and it sure did that!

Check out more photos and posts from Antoine!

Also stop by Antoine's Community Bike Blog called Bike Friendly North Shore which he has run for a few years now encouraging people to bike-for-transport, and generally just get active and have fun with their families

We'd like to thank Antoine for sharing his insight and photography with us!

If you would like to share with us what you have been doing with your Monkeylight, please send an email to  chloe @ monkeylectric . com