Last fall, I went to Mexico for the first time. The trip was long overdue; having grown up in Los Angeles, not far from the border and rife with culture spilling over from its southerly neighbors, I often felt embarrassment for never making the trek across. But now, eight years after leaving LA for a more northern setting, I finally bought a ticket to visit Mexico's capital.

I planned the trip for the end of October, initially thinking I would spend another Halloween in New Orleans to see old friends, play music in the streets, and join in on the excessive holiday… festivities. But my curiosity paired with the ease of searching for plane tickets online led me to different tarmacs. One factor that was difficult to deny was that flying to Mexico is less financially cumbersome than flying to New Orleans. It, too, occurred to me that my dedicated time frame meant I would be in the freaking capital of Mexico during Dia de Los Muertos. And with winter hastily encroaching, why not travel further south? I made up my mind and secured my future travel plans with a few finalizing clicks of the mouse.

After completing my purchase, four friends followed suit and we began making loose preparations. None of us had been to Mexico City before, none of us had friends there, and none of us spoke fluent Spanish. In fact, the five of us combined hardly spoke conversational Spanish. So when we arrived on the 30th, we were armed with limited expectations.

Straight out of the airport, we were greeted by the relentless bustle of automotive traffic. We cabbed from the terminal to the apartment we had rented out for the next few days. It was over an hour of weaving through unpredictable drivers, a tempestuous hub-capped sea of buses, cars (especially old VW Bugs), and taxis, with motorcycles and bicycles scattered amidst. As a full time cycling commuter, I immediately took notice of the bicycles I saw and perceived that despite the lawless traffic and motorists, cycling culture is abundantly present in the streets of Mexico City. 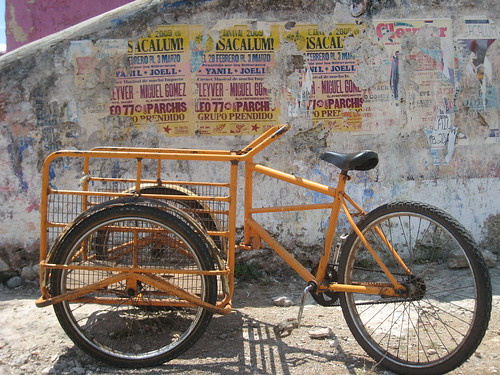 The first bikes that stood out to me were the utilitarian front-load cargo bikes. Throughout my brief stay, I would see these bikes all around the city, transporting teetering towers of goods, large tanks of propane, people, and sometimes corrals of tiny dogs. I love these bikes, the front is basically a steel framed pushcart on two bicycle wheels with the rest of the bike attached by a swinging hinge in the head tube. They look about as heavy as they are useful and seem impossible to steer. It's impressive to think of the effort and strength it takes to pedal around a cargo bike such as this, particularly when it is loaded so high that one cannot see around it. However, most cyclists in the city do not use their bikes strictly for hauling large and heavy objects.

As we drew nearer to the place we stayed, I saw more road bikes and single speeds on the street. I started to notice a vast amount of fire engine red hybrids that came fully equipped with head and tail lights and white signs attached to the fenders reading, "EcoBici." We learned that these EcoBicis are part of a city wide program launched in 2010 after nearly three years of the wildly popular event, Muévete en Bici, where each Sunday traffic is closed from 8:00 AM until 2:00 PM to motorists on one of the busiest thoroughfares, Avenida Paseo de la Reforma. This event was organized by Mayor Marcelo Ebrard, democratic politician and avid spokesman for cyclist rights, in 2007 as an effort to encourage more people to ride bicycles in the city.

The Muévete en Bici ride that occurred during my visit had a record-breaking 95,000 participants, much of them riding bikes provided by EcoBici. Many locals believe that the advent of Muévete en Bici and the Ecobici installations brought greater awareness and accessibility for cyclists throughout the city, allowing for improvements to be made to the city's cycling infrastructure. The EcoBici program is considered to be very successful and is now the fourth largest city bike share system in the world, having expanded after several years to accommodate tourists and visitors whereas before it was only an option for residents of the city. As of my visit, Mexico City boasted 90 miles of dedicated cycling lanes with the promise of more to come. The motorists, while still a presence to exert extreme caution around are slowly, although sometimes reluctantly, becoming more acclimated to sharing the road with their two-wheeled companions.

Despite these efforts, any road traveled may be a dangerous one. On our first night walking around the trendy neighborhood of La Roma, I stop before a familiar image; a mangled bicycle, rattle-canned white, and chained to a light post. Colloquially known as a ghost bike, one may see these bicycles in hundreds of cities around the world standing to commemorate cyclists whose lives were lost on the street. It is a grim reminder of the risks posed to cyclists everywhere.

But on the night of the Dia de los Muertos and Halloween festivities, pedestrians and cyclists rule the road. We had the happy accident of ending up right in the heart of the city as tens of thousands of people flooded the streets for the celebrations. Everyone was dressed up, there was live music and vendors on every corner. We stopped to watch an instrumental surf-rock band called Los Mandragora playing in a packed alleyway. The wail of the amplifiers and the cheers from the celebrators reverberated off the mosaicked sides of the magnificent Spanish Colonial buildings around us.

While standing among throngs of costumed people congregated in the main square at Zócalo, I became distracted by the whizzing chorus of exceptionally noisy freewheels. I turned to see an enormous pack of adolescents on BMX bikes flying past the square. Some wheelie or bunny hop, others mashed ahead. Toward the end of the pack I spotted two pre-teen girls riding together on one BMX face to face, with one standing and pedaling and the other sitting on the handlebars with her back to the road. Just as quickly as they had all arrived, they had gone and I was left to momentarily muse over this ephemeral vignette before being jarred back to the present by the roar of the crowd that encased me.

Los Mandragora playing in Zócalo on Day of the Dead 2015 | Photo: Chloe Behrens

Chloe Behrens is a production staff member at MonkeyLectric.